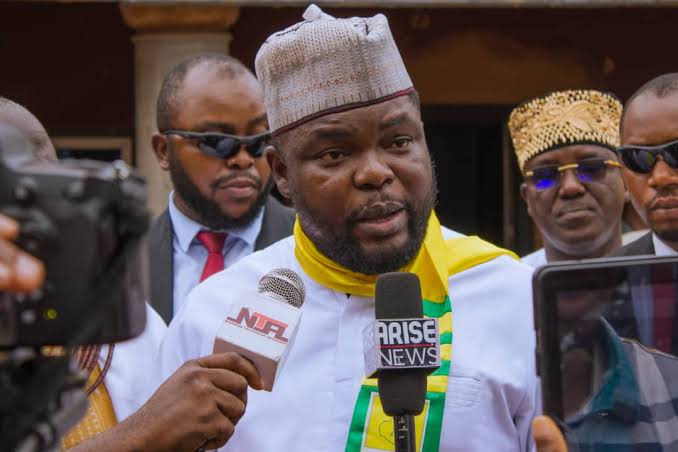 The Accord Party (AP) presidential candidate, Professor Chris Imumolen has given reasons why the prospects of his party will be bright during the 2023 general election.

In a statement on Wednesday, the youngest presidential candidate noted that he represents “the today and the future”.

The AP flagbearer said he’s a symbol of the new generation of leaders ready to change the status quo with determined and purposeful leadership.

“While I am at my peak as a young man who will be 40 next year, I want to be given the opportunity to serve Nigeria and return her to the path of sustainable growth and development”, he wrote.

“Four of my co-aspirants in the presidential race – Asiwaju Bola Ahmed Tinubu, Atiku Abubakar, Peter Obi and Rabiu Kwankwaso – served in various capacities in government in their 40s.

“Tinubu served as governor of Lagos State between 1999 and 2007 in his 40s. The same for Kwankwaso in Kano State, and Peter Obi in Anambra State. They were also in their 40s.
“Atiku, we are told, retired from the Nigeria Customs as Deputy Comptroller General at the age of 43 on April 30, 1989. There is something magical about the age 40.

“That is the time a man, a leader is at the peak of his powers. A time he has all the strength, ability and presence of mind to work and give his all for the development of his people.

“I am also at the verge of reaching that magical age of 40 where I am willing, able and available to serve my people and leave a mark of quality leadership behind.

“This is the time I should be allowed to use the next eight years of my life to serve this nation and make it a better place for us all. God willing, I should be leaving behind a better and a more prosperous country.

“A country with 24 hours electricity; where insecurity will be a thing of the past. A country that will have peace and prosperity; where persistent strikes by the Academic Staff Union of Nigeria Universities (ASUU) will no longer be the order of the day.

“A country where Nigerians would love to stay and work in their country, rather than emigrating to far-flung countries of the world in search of good jobs and the better life.

“A country where all the different ethnic nationalities will find it more convenient to unite than divide because a new era of an all-inclusive governance had been ushered in.

“A country where the youth will find positive avenues for expression as an enabling environment will be created for them to excel in their chosen fields of human endeavour.

“A country where the welfare of each citizen will no longer be treated with levity; where corruption will no longer have an overwhelming foothold like it presently is because a digitalised system is in place to ensure transparency and accountability in the running of the economy.

“A country where the concept of sacred cows and impunity would not be allowed a leeway because the rule of law will be activated and made to work in the true sense of the word.

“A country where official red tape and excruciating bureaucracy will die a natural death following massive reforms that will be effected in the civil service.

“A country where the welfare of our security operatives will be top priority; where our traditional rulers and religious leaders would play more than observatory roles because they form the grassroots support system in a growing democracy like ours.

“A country where our hospitals, clinics, dispensaries and health centres will no longer be mere consulting facilities but places where Nigerians can truly get cure for their ailments and diseases.

“A country where education will be made compulsory and free from primary to secondary school levels; where those who have worked hard to positively project the image of this country are recognised and rewarded. A country we would all be proud to call our own.”

Why I Endorse Peter Obi – Clark