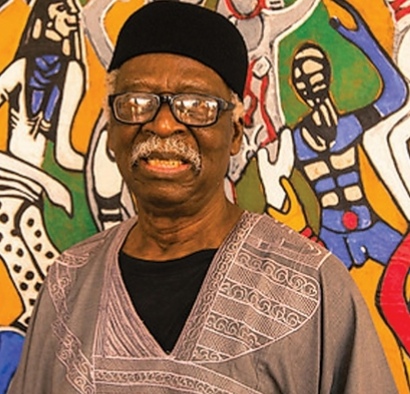 For Prof. Bruce Onobrakpeya, the towering number of years he has spent in life marks him out. This huge milestone is matched by a great number of achievements he has recorded in his long life.

The seemingly inexhaustible list of Prof. Onobrakpeya’s sterling records include: he is the oldest living artist in not only in Nigeria but the whole of Africa. He is older than Nobel Laureate Prof. Wole Soyinka of Nigeria. He is also older than Ngugi Wa Thiongo of Kenya.

Prominent personalities from diverse walks of life gathered on Friday to celebrate this icon as he clocked 90 years. The dignitaries who included former Minister of Information Prof. Sam Oyovbaire, former Chairman of the Editorial Board of The Guardian Prof. G.G. Darah, foremost banker and President of Michael and Cecilia University Mrs Cecelia Ibru, former President of the Nigerian Stock Exchange Goodie Ibru and monarchs were agreed on one thing : the greatness of Prof. Onobrakpeya which has made him not only the pride of Urhobo and Nigeria but that of the entire black race.

Apart from his huge professional output, Prof. Onobrakpeya is equally productive in mentoring the next generation of artists that would take over from him. This was attested to by those he has mentored and those he is still mentoring who came to celebrate him at his country home at Agbara- Otor in Delta State that also houses the Onobrak’s Arts Centre.

At the celebration that spanned two days from Friday to Saturday, there were many cultural displays of the Urhobo people. And from the intellectual side, many academic papers were presented on Urhobo culture, folklore, myths and legends; architecture, design, inventions and technology; the “Zaria Rebels” and 60 years after; painting and printmaking, among others.

Some of the honours Prof. Onobrakpeya has received in recognition of his creative genius are: the award of Member of the Order of the Republic of Nigeria; presented to the President of the Federal Republic of Nigeria, Alhaji Shehu Shagari; Pope Paul VI Gold Medal for Painting Life of St.Paul; Fulbright-Hays Award by America CIES ( Council for International Exchange of Scholars); and Urhobo Historical Society Lifetime Achievement Award.