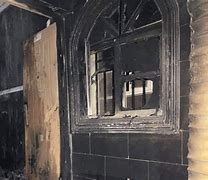 A building which reportedly belongs to Yoruba activist, Sunday Adeyemo (aka Sunday Igboho) has been razed in Ibadan by suspected arsonists.

Igboho has been in the news recently for giving eviction notice to killer herdsmen in Ibarapa area of Oyo State.

The house is located in Soka area of Ibadan, the state capital. He lives in the same neighborhood.

The fire incident, which destroyed some parts of the house, was said to have occurred early Tuesday morning.

From the photos seen on social media, several valuables worth millions were destroyed in the house.

It was gathered that fire fighters from the Oyo State Fire Service arrived at the scene few hours after the fire started.

Sunday Igboho is yet to react to the development.

The Return of Akeredolu By Ebun-Olu Adegboruwa, SAN