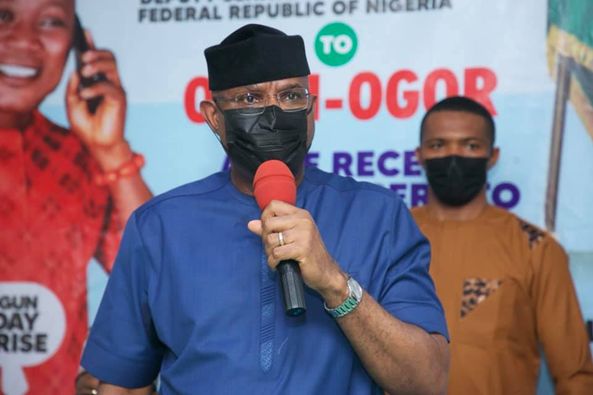 Omo-Agege made the accusation as he declared for governorship in Delta on Thursday.

His party, the All Progressives Congress (APC) in Delta has said it is issuing a quit notice to the Peoples Democratic Party (PDP), following the official declaration to run for governor by Omo-Agege.

The National Vice-Chairman(South-South) of the APC, Victor Giadom during a speech at Omo-Agege’s declaration at the Federal University of Petroleum Resources, FUPRE in Uvwie, said Delta State was ripe to be taken by the APC.

“I hereby issue a quit notice to PDP in Delta State. Pack your load and go.

“The APC has come to Delta this afternoon to issue final departure to PDP .”

Sen. Omo-Agege, who officially declared his intention to contest the 2023 governorship election in Delta State said, “I offer myself as a candidate for the office of governor 2023.”

Omo-Agege claimed Okowa has continued to marginalise the people of Delta State.

While noting that Okowa rode on the back of the people of Aniocha North and Aniocha South,

Oshimili North and South to be governor, Omo-Agege said ”you will not feel Okowa’s presence in those areas”.

Omo-Agege also noted that a majority of Delta State youths were unemployed insisting that, “Okowa wants you people to ride Okada, to ride Keke while people who are close to him drive the best cars”.

He claimed that pensioners in the state were not being paid their retirement benefits.

Tight Security At Lekki-Ikoyi Link Bridge Over Resumption Of Tolling