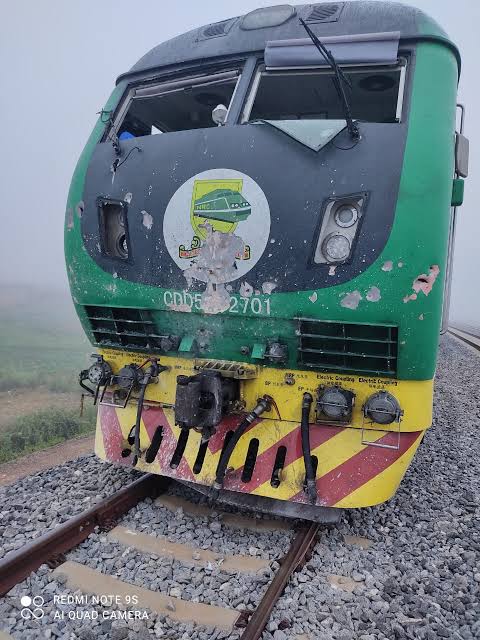 A deployment of troops of the Nigerian military has led to the rescue of the passengers of the Abuja-Kaduna train which was bombed and immobilised by terrorists on Monday.

The terrorists detonated bombs on the Abuja-Kaduna rail track thereby forcing the Kaduna-bound train carrying 970 passengers to a stop.

The Commissioner for Internal Security and Home Affairs in Kaduna State, Mr Samuel Aruwan, said in a statement on Monday night that the military secured the passengers and the train.

Aruwan said that relevant security agencies who were contacted mobilized promptly to the area to secure the passengers and the train.

The commissioner added that efforts were being made to evacuate the stranded passengers from the area while the injured were moved to hospitals for urgent medical attention.

READ ALSO: Bandits Bomb Abuja-Kaduna Train With Over 970 Onboard

He added that security forces were combing general area in additional rescue efforts.

He said: “Security agencies have reported to the Kaduna State Government that the military has secured the Kaduna-bound train from Abuja trapped by terrorists.

“The Kaduna State Government received multiple reports of an attack on the Abuja-Kaduna train service at around Kateri-Rijana general areas.

“Relevant action agencies were urgently contacted, and robust deployments of personnel were swiftly made to the area to secure the passengers on board.

“Efforts are ongoing to convey the passengers from the location and others that sustained injuries have been rushed to hospitals for urgent medical attention.

“The Government of Kaduna State will be liaising with the Nigerian Railway Corporation (NRC) to ascertain the list from the passengers’ manifest for efficient tracking.

“This is to acquire an accurate inventory of all passengers and their actual status.”

“Governor Nasir El-Rufa’i who has been in constant touch with the security forces, commended them for their prompt response, and thanked them for successfully securing the train and passengers on board.

“Security forces continue to comb the general area in additional rescue efforts. Emerging developments will be communicated to the public.”

BREAKING: Bandits Bomb Abuja-Kaduna Train With Over 970 Onboard