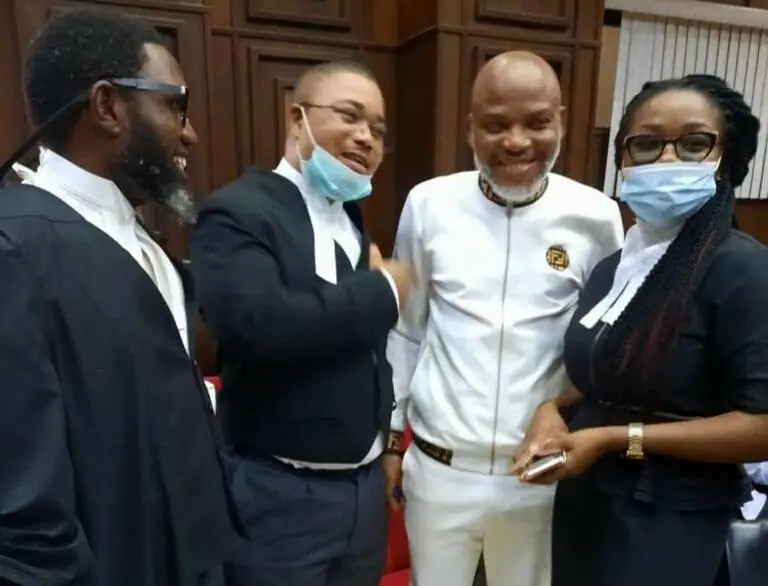 The Federal Government has amended charges against the Indigenous People of Biafra (IPOB)  Nnamdi Kanu and accused his lawyers of being his accomplices.

The government is now set to re-arraign Kanu on an amended six-count treasonable felony charge.

The amendment came on a day trial Justice Binta Nyako fixed to hear an application Kanu filed to be released on bail, pending the determination of the charge against him.

A member of Kanu’s legal team, who craved anonymity said that the government had in the amended charge, listed some lawyers representing the embattled IPOB leader, including Mr. Ifeanyi Ejiofor and Mr. Maxwell Opara, as accomplices of the defendant.

It was learnt that the government alleged that the said lawyers, were constantly in contact with Kanu, after he jumped bail and fled the country.

Kanu was subsequently re-arrested and returned to the country from Kenya in controversial circumstances.

Trial Justice Binta Nyako had on April 8, struck out eight out of the 15-count treasonable felony charge the government preferred against Kanu.
Justice Nyako held that the charges were mere repetitions that did not disclose any offence that could be sustained by the proof of evidence before the court.

The government had in the counts that were struck out, alleged that Kanu had through his broadcasts, incited members of the public to not only stage a violent revolution, but to attack police officers and also destroy public facilities in Lagos State.
While the court threw out counts 6, 7, 9, 10, 11, 12,13 and 14 of the charge, it okayed Kanu’s trial on counts 1, 2, 3, 4, 5, 8 and 15.

The ruling followed an application Kanu filed to quash the entire charge against him, which he insisted was manifestly incompetent and legally defective.

The IPOB leader, through his team of lawyers led by Chief Mike Ozekhome (SAN), argued that the court lacked the jurisdiction to try him on the strenght of an incompetent charge.

Ozekhome (SAN), further told the court that his client was “unlawfully, brutally and extraordinarily renditioned from Kenya without his consent.”

READ ALSO: Political Solution Not Ruled Out In Release Of Nnamdi Kanu – Ekweremadu

He argued that since some of the allegations the government levelled against Kanu, were purportedly committed outside the country, the high court, therefore, lacked the jurisdiction to entertain the charge.

“The charges appear to give this court a global jurisdiction over offences that were allegedly committed by the defendant, without specifying the location or date the said offences were committed”.

He argued that under the Federal High Court Act, such a charge must disclose specific location where the offence was committed.

More so, Ozekhome contended that Kanu could not be charged with belonging to an unlawful organization since the action of the government, in proscribing the IPOB, is still subject of legal dispute at the Court of Appeal and therefore subjudice.

Consequently, he urged the court to dismiss the charge, as well as to discharge and acquit the defendant.

However, government’s lawyer, Mr. Shuaibu Labaran, opposed the application and urged the court to allow the prosecution to open its case.

He argued that Kanu’s application would touch the substance of the case that is yet to be heard.

“The position as at now is that the IPOB is a proscribed organization which was duly proscribed through the due process of law”.

He argued that Section 32 of the Terrorism Prevention Act imbued the court with the requisite jurisdiction to handle the trial.

On Kanu’s bail request, Ozekhome, maintained that the amended charge contained bailable offences, while Labaran argued that the defendant betrayed the previous discretion the court exercised in his favour when he jumped bail and escaped from the country.

He argued that it was owing to Kanu’s conduct that the court revoked his bail and issued a bench warrant for his arrest.

The government had in some of the charges that were sustained by the court, alleged that Kanu had in his broadcast that was received and heard in Nigeria, issued a deadly threat that anyone who flouted his sit-at home order, should write his/her Will.

It told the court that as a result of the threat, banks, schools, markets, shopping malls, fuel stations domiciled in the eastern states of Nigeria, were not opened for businesses citizens and vehicular movements were grounded.

It alleged that Kau had on diverse dates between 2018 and 2021, made a broadcast received and heard in Nigeria, inciting members of the public to hunt and kill Nigerian security personnel and their family members, thereby committing an offence punishable under Section 1 (2) (h) of the Terrorism Prevention Amendment Act, 2013.

While the government, in count eight alleged that Kanu directed members of the IPOB “to manufacture Bombs”, it told the court in count 15 that the defendant had between the month of March and April 2015, “Imported into Nigeria and kept in Ubulisiuzor in Ihiala Local Government Area of Anambra State within the jurisdiction of this Honourable Court, a Radio Transmitter known as Tram 50L concealed in a container of used household items which you declared as used household items, and you thereby committed an offence contrary to section 47 (2) (a) of Criminal Code Act Cap, C45 Laws of the Federation of Nigeria 2004 ”