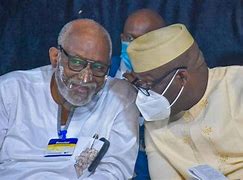 Some state Governors led by the Chairman of the Nigeria Governors’ Forum and Ekiti State Governor, Kayode Fayemi on Monday held a meeting with national leaders of the Miyetti Allah Cattle Breeders Association (MACBAN) in Akure, Ondo State capital.
The meeting which became neccesary due to the challenges between farmers and herders was to proffer a workable blueprint on curbing criminal activities by bandits, kidnappers, and others who hide in forests to unleash mayhem on innocent citizens.
At the end of the meeting, all parties agreed to prioritize national security, the governor conluded that night grazing across the South-West region be banned.
The leadership of the Miyetti Allah group present at the meeting were also encouraged to embrace modern global ranching practices which prevent cattle roaming that could result in the destruction of farm produce.
The communique issued at the end of the meeting partly noted that “the order of the Ondo State governor was misconstrued and misinterpreted by a section of the media. The governor only ordered those occupying the forest reserves in Ondo State illegally to quit.”

It further states that “night grazing should be banned henceforth while underage herding is inimical to security and hence be banned and occupation of state forest reserves illegally is condemned.”
On its part, MACBAN said that they had also suffered insecurity and kidnapping, hence they desired peaceful coexistence and that they were ready for any peaceful move by the states to engender security.
Other resolutions reached were: “There must be an enduring framework with MACBAN in a way that will help address security issues.
“That free-range grazing must be stopped to avoid conflicts between the farmers and the herders.
“Strengthening alternative security arrangements and make them complementary to the mainstream security agencies in Nigeria.
“MACBAN should embrace and be committed to modern breeding process by creating grazing reserves and practice ranching to prevent cattle roaming about.”
The meeting also resolved that “a standing committee comprising farmers, MACBAN and the government should be set up in each state to ensure synergy and result.
“We must create economic opportunities for our people and reduce opportunities for criminalities in our country.”
Governors Seyi Makinde of Oyo State; Gboyega Oyetola of Osun State; Muhammadu Badru Abubakar of Jigawa State; Abubakar Atiku Bagudu of Kebbi State; and Oluwarotimi Akeredolu of Ondo State were all in attendance at the meeting.

The meeting comes after various opinions were aired as a result of the quit order issued to Fulani herdsmen to vacate the forest reserves of Ondo State as well as the 7 days ultimatum given by Sunday Igboho to herdsmen to leave Oyo State.
Speaking at the event, the governors bemoaned the incessant and unprovoked attacks on their citizens and vowed to protect them while promoting unity, and good neighborliness.
Oyo State Governor, Seyi Makinde noted that the meeting was not about politics but a meeting about “a serious challenge we are faced with.”
He said “we will not use criminality to solve criminality as nobody can predict the outcome of such. We will continue to work with our people to face the kidnappers, bandits, armed robbers who are our common enemies. We have to deal with the issue of fake news.”
He added that his administration “will continue to expand the economy and provide job opportunities for our people. We will continue to provide the leadership that the country needs at this time.”
On his part, the Ondo State Governor, Oluwarotimi Akeredolu said kidnappers were using forest reserves as an area of operation for kidnapping, hence the need to regulate activities within and around the forest areas.
“Even our farmers are registered, we all agreed no night grazing, no underaged grazing. We will ban grazing in cities. I assure you we can all work together to chase all criminals from the state. We must be able to identify and move them out of the forest reserves. We must protect everyone living in Ondo State,” Akeredolu said.

How We Were Forced To Pay N50m Ramson – Ibarapa Community