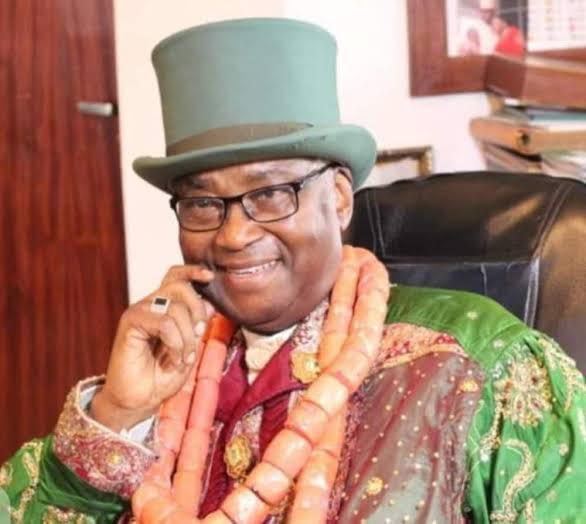 Alabo Tonye Graham-Douglas, a four-time minister and one of the founding fathers of the Peoples Democratic Party (PDP) is dead.

Graham-Douglas was aged 82. He died thirteen days to his 83rd birthday which would have been celebrated on May 8, 2022.

It was learnt that the elder statesman and patriarch of Graham-Douglas family from Abonnema in Akuku-Toru Local Government Area of Rivers State died on Monday, April 25, 2022 in a private hospital in Abuja.

The cause of death remained unknown as of the time of publishing this report, just as an official statement announcing his passing had yet to be released by the family.

Graham-Douglas’ life and times were packed full of great accomplishments, a skim through his story as documented in douglashistory.co.uk has shown below:

Chief Alabo Tonye Graham-Douglas, a four-time federal minister and one of the founding fathers of the Nigerian Peoples Democratic Party (PDP), was born on 8 May 1939 in Abonnema in the Akuku-Toru Local Government Area of Rivers State.

“The son of a native court judge who settled disputes and altercations in his immediate Abonema, he is of Ijaw origin.”

His brother, Napo Graham-Douglas, was the first indigenous Attorney-General of Nigeria.

He attended secondary schools in Lagos and Port Harcourt.

He became managing director of Togiscani Nigeria, a construction company (1978 – 1985) and CEO of Road Haulage Company and Magroad Enterprises.

He was also chairman of the Binterteco Nigeria, Pabod Finance and Investment and Waterglass Boat Yard.

In 2000, Graham-Douglas was appointed Provincial Grand Master of the Freemason’s Lodge in Calabar.

Graham-Douglas became Commissioner for Youths, Sports and Culture in 1986 in the Rivers State government.

In this role, he completed the Alfred Diete-Spiff Civic Centre, founded the Sports Institute of Isaka and initiated construction of the Liberation Stadium, Port Harcourt.

He also gained approval to establish the Rivers State College of Science and Technology.

He created, produced and directed the first Rivers Carnival, Carnival ’88 with the theme of Unity in Cultural Diversity.

In 1989 the military government of Ibrahim Babangida appointed him Federal Minister for Social Development, Youths and Sports.

During his tenure, the separate Ministry of Women Affairs was established.

He was moved to the Ministry of Aviation where he oversaw the deregulation of the aviation industry.

He was also a member of the Special Tenders Board, which developed the Abuja FCT.

Several years later, in November 2003, a judicial commission of inquiry into management of Nigeria Airways between 1983 and 1999 issued a report that indicted Graham-Douglas and others for mismanagement and decisions that led to huge losses.

In 1992 Graham-Douglas became chairman of the Southern Minorities Movement, one of the groups that eventually merged into the People’s Democratic Party (PDP).

He was a candidate in the PDP primaries for the presidential nomination in 1998, losing to Olusegun Obasanjo, who went on to become president.

In July 2000, Graham-Douglas was re-deployed in the Ministry of Culture and Tourism.

In November 2000 he headed a delegation that visited China, where he signed the 2000-2002 Executive Plan of Cultural and Educational Exchange between China and Nigeria.

In December 2000 he hosted the Africa Travel Association’s Fourth Ecotourism Symposium in Abuja.

He described ecotourism as responsible tourism, saying “Ecotourism conserves the natural environments and sustains the well-being of local people”.

Graham-Douglas was dropped from Obasanjo’s cabinet in January 2001.

An elder statesman in Rivers State politics, in 1999 Graham Douglas and Marshal Harry, Chairman of the PDP in the State, settled for Dr Peter Odili as a consensus candidate for governor.

By October 2002 Graham-Douglas was engaged in a very public dispute with Odili.

He was strongly opposed to Odili’s reelection. He said of Odili that “he has no respect for good governance and we have a right to call him to order”.

In January 2007, following the PDP primaries in Rivers State in which Riverine candidates performed poorly compared to Uplanders, the Ijaw Consultative Assembly which Graham-Douglas had founded launched an attack on Ijaws who had served in Odili’s government, apparently in a move to reverse the selection of Rotimi Amaechi as PDP candidate for governor.

This was a reversal of his position in 2003 when he had said the Ikwerres from Rivers East should take their turn after Peter Odili. Later he became a supporter of Amaechi.

However, in February 2010 Graham-Douglas disagreed with Amaechi about marginalization of the Kalabari people, claiming problems were due to longstanding government neglect combined with efforts to cut oil-producing areas out of the Kalabari region.

Amaechi took the position that Kalabari leaders themselves were to blame, and should do more to develop their communities and discourage militancy.

Talking of the Niger Delta crisis in an interview in October 2009, Graham-Douglas blamed the problems in part on the elections of 2003 when the boys were given arms and used to disrupt the polls.

He said the recent amnesty was progress, but not enough. More should be done to provide local housing and employment.

He was among leaders who that month protested against the poor performance and lack of activity of the Ministry of Niger Delta.

Happily married to Muriel, Graham-Douglas and his wife are blessed with grown up children and lots of grandchildren.

On memories that evoke sadness, he said losing his elder brother, back in 1983 still remained the most memorable day for him.

He had just returned from a meeting in England, where they spent time together just before Christmas when he heard he had died from a heart attack. (douglashistory.co.uk)