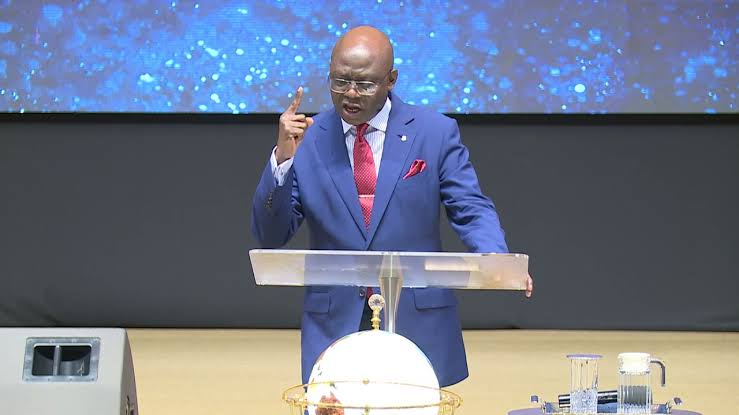 The Servimg Overseer of the Citadel Global Community Church ( CGCC) Pastor Tunde Bakare has declared four contestants for the presidency in the 2023 election as not the best people from who Nigerians should choose a president.

Bakare listed these presidential frontliners as Atiku Abubakar of the (Peoples’ Democratic Party ), Bola Tinubu of the All Progressives Congress ( APC), Peter Obi of Labour and Rabi’u Musa Kwankwaso of the New Nigeria People’s Party (NNPP).

To the cleric who failed to secure the presidential ticket of the APC during the primaries of the party in 2022, the candidacies of the four presidential frontliners are doing the country no good but harm.

According to him, their candidacies remind Nigerians of similar political developments in the past that only worsened the ethnic and religious divides in the country.

Bakare who spoke on Sunday in his church during his state of the nation broadcast titled ” Bridging the gap between politics and governance” said : “First, we are confronted with regional and ethnic memory joggers. For the first time since the First and Second Republics, our political process has thrown up three, rather than two, major contenders for the presidency. As it was in the First and Second Republics, each of the three has his support base in one of the three main regions that constituted the geopolitical foundation of our country, namely the North, the West, and the East, mirroring the ethnic origin of each candidate. With support bases largely regional and with drum beats of ethnic confrontations sounding loud and clear, we are faced with a stark reminder that we have merely papered over the cracks of the regional and ethnic fault lines in our political history.

“Secondly, five decades after the end of the Civil War, unanswered questions that border on national reintegration continue to stare us in the face even as the true political inclusion of the South East remains a strong imperative in our quest for nationhood. The momentum around the candidacy of the Labour Party’s Mr Peter Obi has further brought this to the fore, reminding us that, as a nation, we cannot face our future with the structural imbalances and inequities that defined our past. Moreover, the ‘Obidient’ movement has also become a memory jogger in the generational context, reminding us of how the undesirable state of the nation and the inadequacies of the old political order can push the youth to the wall, provoking a younger generation that does not pull punches in confronting whoever appears to represent the old order. Unfortunately, nationhood has historically been the casualty and Nigeria has been the loser in such inter-generational wars.

“Furthermore, the growing support for the candidate of the Labour Party by Nigerian Church communities is worthy of note. However, while the awakening of political consciousness among Christians is commendable, in a religiously diverse polity, the optics of a political strategy that is identified more with one religion than the other is a sad reminder of the lingering divisions clogging the wheels of our journey to nationhood. The messaging and mannerism of some church leaders in this regard is also a pointer to the failure of the ecclesiastical order to recognise that, in Nigeria’s nationhood equation, you cannot wish Ishmael away. Just as you cannot successfully clap with one hand, you cannot build a logical Nigerian narrative around one religion to the exclusion of the other.

“This divisive and illogical religious rhetoric also has its propagators among Muslim clerics who seek to rally their congregations in support of the Muslim-Muslim ticket of the All Progressives Congress (APC) simply because it gratifies their quest for the domination of one religion by another. Those who adopt such a retrogressive religious paradigm that relegates development and good governance to the background have failed to see the link between the massive poverty and underdevelopment in Northern Nigeria on the one hand and their brand of Islam on the other hand which is different from the type practiced by forward-thinking nations like the United Arab Emirates and Qatar.

READ ALSO: How Deputies Of Atiku, Tinubu, Obi Will Decide Their Fates In North – Arewa Youths

“Indeed, the 2023 general election is coming thirty years after the June 12, 1993 elections that proved to be a watershed in our journey to nationhood. That election, thirty years ago, laid the foundation for our current democratic dispensation upon the sacrifice of Chief M.K.O. Abiola. Thirty years on, the Muslim- Muslim ticket of the APC has become a memory jogger reminding us of the intrigues of the 1993 election. Even as the candidacies of Asiwaju Bola Ahmed Tinubu, a Muslim, and his running mate, Senator Kashim Shettima, another Muslim, have heightened the religious tension in our polity, the annulled June 12, 1993 election has become a reference point for the ‘BATified’ who are defenders of the same-faith ticket. Meanwhile, their opponents are quick to remind them that 2023 is a generation away from 1993 and presents different circumstances. The proof that 1993 and 2023 are a generation apart is the fact that the young have since grown. This is evident in the fact that thirty years after 1993, Kola Abiola, the son of Chief M.K.O. Abiola, is on the ballot as a presidential candidate of the People’s Redemption Party (PRP) in 2023. However, the sad reality is that, while the young have grown, we, as a nation, have not grown in national unity these past thirty years but have rather become more divided by religion.

“Meanwhile, the candidacy of former Vice President Atiku Abubakar of the People’s Democratic Party (PDP) has brought to the fore the unresolved North-South dimension of the National Question. Despite the ‘unifier’ messaging of the ‘Atikulated,’ and despite the religious balancing that defines this ticket, the power rotation conundrum is a memory jogger pointing to our failure as a nation over the decades to revisit foundational issues and carve out governance structures that can harness the best of the North and the best of the South.

“In addition to the memory joggers presented by these three frontline political leanings, the 2023 election also brings class divisions to the fore. The candidacy of Dr Rabi’u Musa Kwankwaso of the New Nigeria People’s Party (NNPP) has been cast “in the mould of [Mallam] Aminu Kano.”9 However, the ‘Kwankwasiya’ momentum among the ‘Talakawas’ or so- called ordinary people in Northern Nigeria is also a reminder of the history of bad governance and the weaponisation of deprivation that has left 86 million people in the region wallowing in multidimensional poverty. 10 There is no greater proof of the widening gap between politics and governance in Nigeria than the fact that 40 years after the disruptive politics of Aminu Kano, Northern Nigeria remains overwhelmingly poor despite the dominance of that region in our politics since independence.

“This gap between politics and governance, which has been further widened by the polarising convergence of ethnic, generational, religious, regional, and class divisions, is what we, the Nigerian people, are confronted with in 2023. Nigeria is again at a pivotal crossroads. The divisive campaigns of the frontline candidates of the four major parties have turned logic on its head such that no matter the optimistic permutations, there is palpable fear all around us as to what Election 2023 has in store for our fragile nation. It appears that, whichever choice we make among the leading candidates, we will still be confronted with unresolved divisions. However, this is no time to be paralysed by divisive and debilitating fear; rather, this moment beckons on us to look in faith to the one God by whose help we can build one great and united country. With this faith, we can rest assured that the New Nigeria will be established and that the verdict of the 2023 election will be: NIGERIA WINS.”