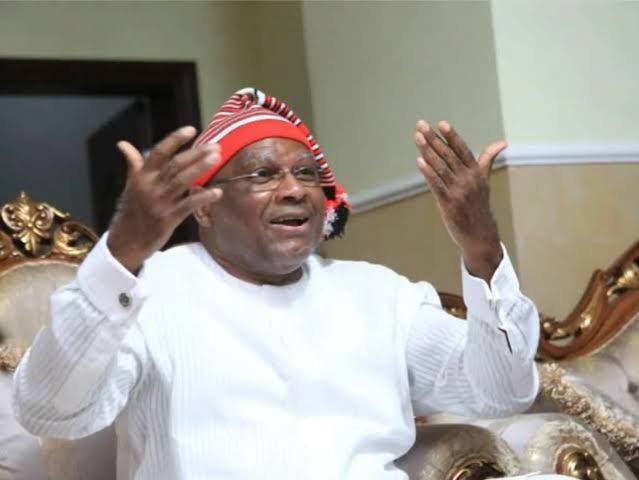 He said Nnamani and seven others had been suspended over “anti-party activities”.
Ologunagba said the decision was taken after an “extensive review” of the party’s activities in the country in line with the PDP constitution.

The PDP scribe said their suspension was with immediate effect.

“The National Working Committee (NWC) of the Peoples Democratic Party (PDP) has after a very extensive review and consideration of the affairs of our party in the country, pursuant to the provisions of the PDP Constitution (as amended in 2017) approved the suspension of Senator Chimaroke Nnamani (Enugu State) and Chief Chris Ogbu (Imo State) with effect from today, Friday, January 20, 2023, over allegations of anti-party activities,” the statement reads.

“The PDP urges all leaders, critical stakeholders and teeming members of our party across the country to remain united and focused on the mission of our party to Rescue, Rebuild and Redirect our nation from misrule.”

Despite being a member of the PDP, Nnamani has publicly expressed his support for Bola Tinubu, presidential candidate of the All Progressives Congress (APC).

In December 2022, the former governor of Enugu, said he was supporting Tinubu in the interest of the south-east.

“I’m not looking for ministerial position because I have outgrown that. We are doing this in the overall interest of our people,” he said.

“Ndigbo are using our support for Tinubu and APC in 2023 to build bridges across the country.

“Don’t join issues with people who are resorting to insults. Just concentrate on the goal because this is a very serious business.”

In a recent interview, the PDP spokesperson said the party will “respond” to those who are members of the party but do not support the presidential bid of Atiku Abubakar, the PDP standard-bearer.

Apart from Nnamani, the PDP G5 — a group of five governors — Nyesom Wike of Rivers, Ifeanyi Ugwuanyi of Enugu, Samuel Ortom of Benue, Seyi Makinde of Oyo, and Okezie Ikpeazu of Abia — have not declared support for Abubakar.