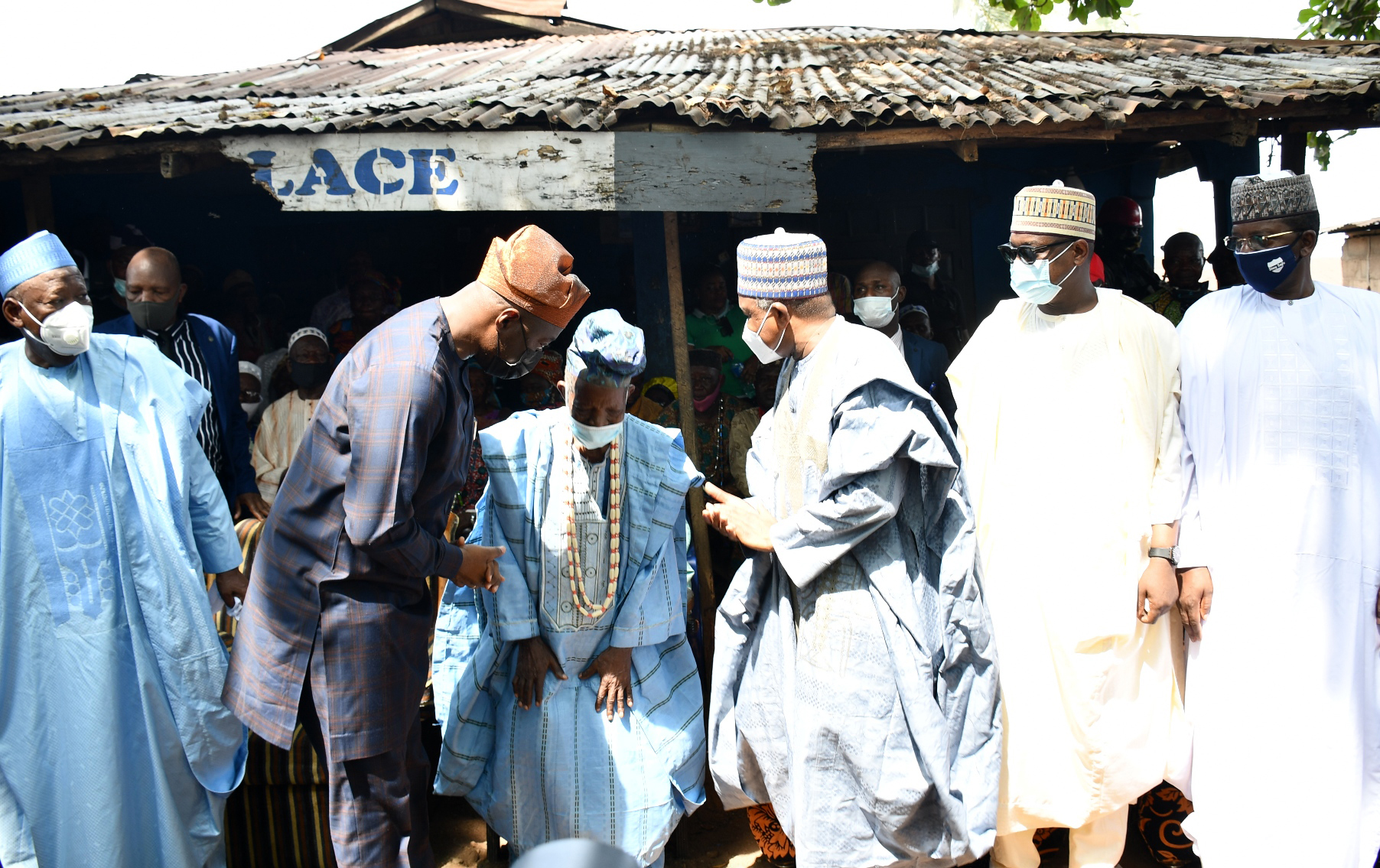 The Nigerian Governors’ Forum (NGF) on Tuesday pledged to help rebuild the Sasa Market, Ibadan, which was burnt down in the wake of the crisis that engulfed the market last week.

A delegation of the NGF led by the governor of Kebbi State, Abubakar Atiku Bagudu, which visited Ibadan, delivered the promise after a tour of the trouble spot.

Bagudu, who was joined by his colleagues from Zamfara, Kano, and Niger States, said that the city of Ibadan was calm, contrary to the pictures being circulated on social media.

He commended the Oyo State Governor, ‘Seyi Makinde for what he has done so far in restoring peace and normalcy to the community, adding that the streets of Ibadan are calm and peaceful.

Bagudu said: “We, the Nigerian Governors’ Forum, are going to support. As a matter of fact, we have given a token to those who are already displaced, and we will meet at a wider table tomorrow and can assure that more support will be mobilised.”

He declared that the unity of Nigeria and the need to restore peace were weightier than political divides, adding that his administration was ready to ensure peaceful co-existence among the residents of Sasa community in Akinyele Local Government Area of the state.

While speaking at the palaces of Seriki Sasa and Baale Sasa, the governor called for calm and unity among the Hausa and Yoruba living in the community, urging everyone to join hands with the administration.

A statement by the Chief Press Secretary to the governor, Mr. Taiwo Adisa, indicated that he appreciated the governors for coming together in one accord to find a way to restore peace to Oyo State and to the country.

He said: “As a government, we will continue to look for an avenue to restore a peaceful co-existence for all of us. Please, I want you to join hands with us and we also acknowledge that sometimes, we process information and we may not get to the roots of the issue. If you see something, say something to us and we will address the challenges frontally.”

The governor explained that his relationship with the Arewa community through the Seriki dated back years before he became governor of the state, adding that his message to all sides was to give peace a chance.

The governor said: “Even before I became the governor, I have always had solid interaction with the Arewa community through Baba. I still remember that in 2013, I came here, and Baba was trying to make me feel comfortable.

“So, we have been together for long. I feel the pain of everybody involved here because properties were lost, and we can replace properties. It may be painful, but when the fire started, and I was contacted, I said they should send a fire truck here and the fire truck was vandalised, damaged.

“So, I told the people that it is annoying that we have to use money that could have been used for something else to replace the fire trucks and to rebuild all of these places. But those are minor cases; when a life is lost, we can’t replace it. We cannot make life. So, my message is that of peace.”

Governor Makinde also commended the NGF for coming together to identify with the state and to show solidarity with efforts to unite all sides.

“We all have to come together, and I thank my brother governors that have come here, first to identify with us in this period of crisis and also to show solidarity with our efforts towards uniting everybody.

“So, again, on behalf of the government and people of Oyo State, I want to thank Your Excellencies for your time this morning. This is a period to show leadership for the country at the top level and you can see that it is appalling seeing that some people are trying to politicise issues of security and loss of lives.

“My brother here is the governor of Zamfara, and he is from the PDP. I am PDP but the issue of unity in Nigeria transcends PDP, APC, and all of that. That is why we are coming together in one accord to find a solution that will restore peace to Oyo State and to our country.”

The governor equally urged the promoters of fake news to desist from spreading falsehood, saying that fake news can easily stoke fires in the society.

“And we have observed also that some people have made it a duty to be mongering fake news. They are the ones stoking fire around here and some of the people that are not aware will easily buy into it and start doing something that we will all regret later.

“I want to urge the promoters of fake and divisive news to please desist. Let us have the chance to give our people the opportunity to earn their decent living.”

Speaking on the relocation of some traders to Iroko, the governor declared that he had also closed the said market, adding that every stakeholder in the markets must sign an undertaking to maintain peace before he would agree to reopen the market.

While speaking on behalf of the Nigeria Governors’ Forum shortly after the inspection, Kebbi State governor, Atiku Bagadu, explained that the motive of the governors’ visit was to commiserate with the government and people of the state on the unfortunate incident that led to the destruction of properties in the state.

He called on Hausa, Yoruba, Igbo, and other tribes living in fear to send their community leaders to the Government House, Ibadan, so that the government could address their fears.

“To those outside Ibadan, particularly the Northern states …the regrettable incident has happened, but it is not a tribal but a regrettable conflict that different communities in Oyo State are holding themselves to sort out.”

The Kebbi governor added the Nigerian Governor’s Forum will assist the state government in rebuilding the market and providing palliative for the victims, saying: “We were well received by our host, Governor Makinde, who briefed us about what happened. And, today, he has taken us to Sasa market. On our way, we had a stop-over at Bodija market and we are pleased that we saw Nigerians of different tribes at the market conducting activities, which is evidence of return of normalcy.

“In fact, we saw some onion sellers from different states, including Kebbi, Zamfara, and Sokoto and other states.

“We went to Sasa market and saw the destruction but more than the destruction was a regrettable loss of lives that was caused by a condemnable spontaneous response to emotions, because both the Hausa and Yoruba community were unanimous that two issues led to this situation.

“One, there had been contention over the leadership of the Sasa market but even though the Seriki Sasa and Baale of Sasa are in agreement about leadership, other interested groups were not so in agreement. So, there was this undercurrent playing out.

“On the other hand, there was somebody pushing a wheelbarrow with tomatoes and it fell in front of a shop. Ordinarily, one would have thought such is normal in a market but since emotions are pent up, unfortunately, we had such a situation. We sympathise with all those who lost their lives and property.

“We saw the damage and we appreciate what the governor has done so far. We have seen what the security agencies have also done, and we are glad that things are returning to normalcy.

“The Seriki Sasa and Baale have confirmed that everyone is ready to stay and conduct their lawful activities and the governor has assured that he will continue to ensure that all communities continue to live without fear.”