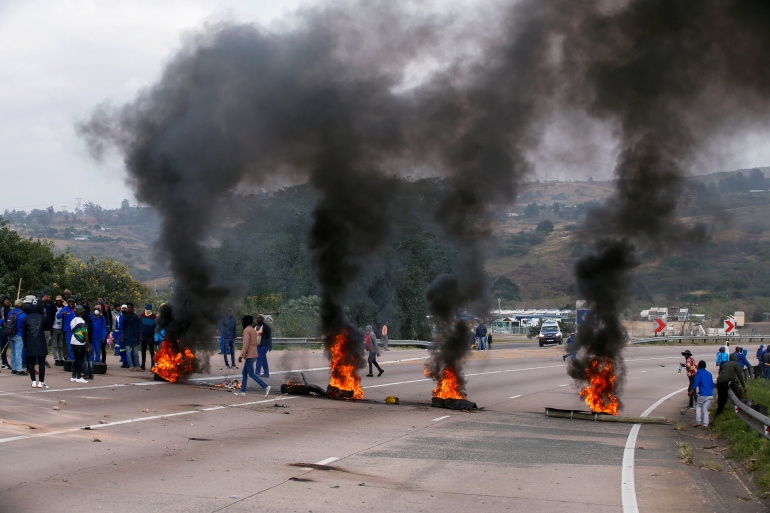 As unrest sparked by the jailing of ex-president Jacob Zuma last week continued, buildings were set on fire and property looted in South Africa on Monday .

The country’s top court, which ordered Zuma jailed for refusing to appear before a corruption probe, is holding a review of its decision with a ruling expected later on whether the sentence will be upheld.

The 79-year-old former anti-apartheid fighter remains popular, especially in his native KwaZulu-Natal province where he is seen to embody traditional values.

KwaZulu-Natal was hit hard by protests over the weekend, and on Monday flames could be seen coming from the roof of a shopping centre in provincial capital Pietermaritzburg as hordes of people rushed in to loot.

In Eshowe, a town near Zuma’s Nkandla home, police opened fire to disperse crowds after a supermarket was ransacked early on Monday.

Police said some sections of a major road in Johannesburg had been closed because of the protests.

Dozens of cars were torched over the weekend in Johannesburg and KwaZulu-Natal, where protests erupted a day after Zuma was imprisoned on Thursday.

Although some of the protests appear to have been triggered by Zuma’s 15-month detention for contempt of court, they are tied in with economic hardship and tightened restrictions brought on by a third wave of the Covid-19 pandemic.

“While there are those who may be hurt and angry at this moment, there can never be any justification for such violent, destructive and disruptive actions,” he said.
AFP

Egypt Moves To Flush Out Civil Servants With Links To Terrorists 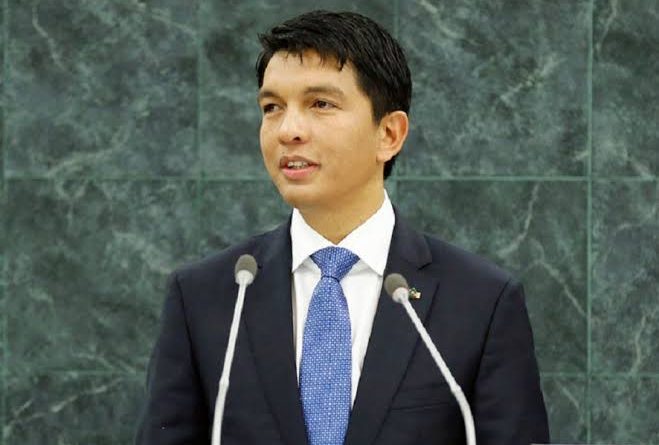 Several “foreign and Malagasy” suspects have been arrested after an alleged assassination attempt on President Andry Rajoelina was foiled.

Two French people are among several arrested in the Indian Ocean island nation on Tuesday “as part of an investigation for undermining state security”, diplomatic sources said.

“Several foreign and Madagascar nationals were arrested on Tuesday, July 20, as part of an investigation into an attack on state security,” said prosecutor Berthine Razafiarivony, in a statement released overnight.

“At this stage of the investigation, which is ongoing, the prosecutor-general’s office assures we will shed light in on this case,” she added.

During the country’s Independence Day celebrations on June 26, the gendarmerie announced that they had foiled an assassination attempt on their boss who is also the president’s right-hand man, General Richard Ravalomanana. 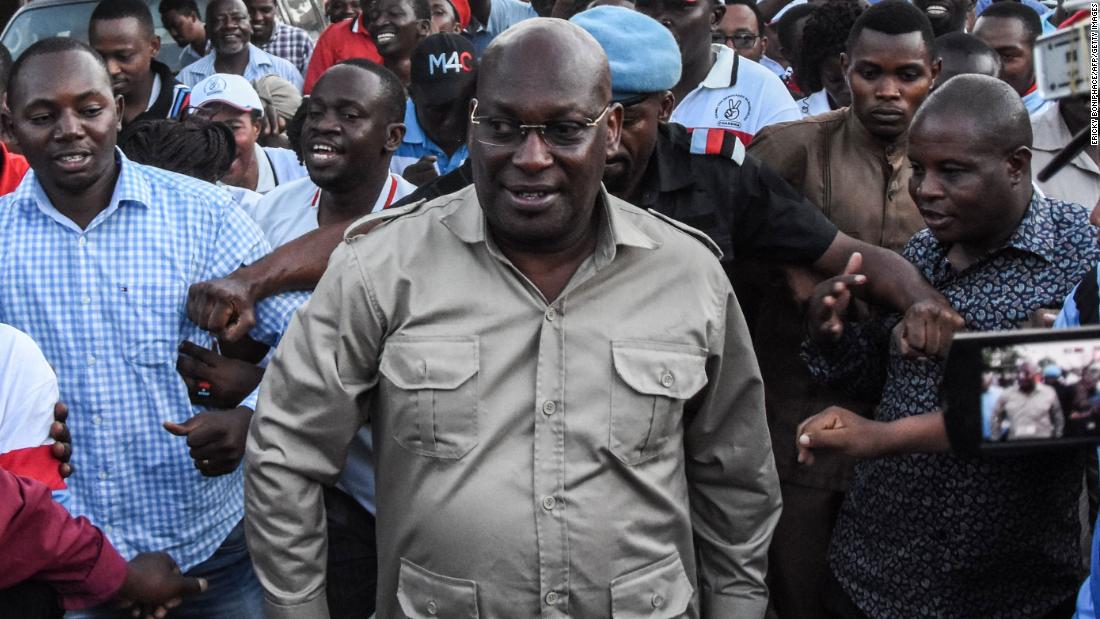 Ahead of a planned conference to demand constitutional reforms, the leader of Tanzania’s main opposition party Chadema and other members were arrested early Wednesday.

Freeman Mbowe and 10 Chadema members were rounded up in the dead of night in the northwestern port city of Mwanza, the party said on Twitter.

“We condemn the repression of the rights of Tanzanians with the strongest force. These are signs that the dictatorship that existed during the rule of President John Magufuli continues,” the party charged.

“Freeman Mbowe was accosted by an army of police officers in his hotel when he arrived at 02:30 a.m. and was arrested together with other leaders,” it said.

While the other Chadema members were taken to Mwanza police station, there was no information about Mbowe’s whereabouts.

“We want the police to come out and say where the chairman is and why he was arrested,” Chadema said.

There have been high hopes that Hassan would usher in a change from the autocratic rule of her predecessor, who was nicknamed the “Bulldozer” for his uncompromising leadership style.

The arrests took place after Mbowe vowed to go ahead with a meeting on constitutional reforms despite Mwanza provincial authorities banning public gatherings to contain the spread of coronavirus.

“We cannot continue with the old order,” Mbowe said in a video published on Twitter on Monday, dressed in a red shirt and beret.

“We have the right to meet but are arrested, beaten, accused and taken to court for two to three years and then freed.

“If they want to arrest all members of the Chadema party, let them first expand the jails because we are all ready to be arrested and will not request bail.”

In April, Hassan had reached out to the opposition and vowed to defend democracy and basic freedoms in the East African country, which had seen a slide into autocratic rule under her predecessor.

In November 2020, several top opposition leaders including Mbowe were briefly detained after calling for mass protests against what they charged was a rigged election that returned then president Magufuli to power for a second term.

The deeply Covid-sceptic Magufuli died in March of what the authorities said was a heart condition but his political opponents insisted he had coronavirus.

Tanzania was long seen as a haven of stability and democracy in an otherwise volatile neighbourhood, but alarm grew over Magufuli’s increasingly authoritarian rule. 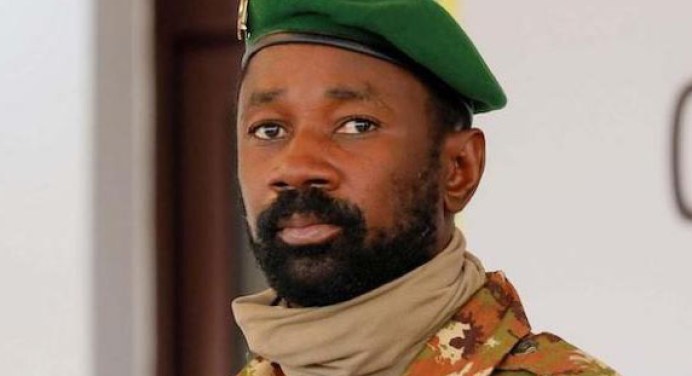 Mali’s interim president, Assimi Goita was attacked by two armed men on Tuesday during the prayers for the Islamic festival of Eid al-Adha at the great mosque in the capital Bamako, an AFP journalist said.

Goita has since been taken from the scene, according to the journalist, who said it was not immediately clear whether he had been wounded.

Religious Affairs Minister Mamadou Kone told AFP that a man had “tried to kill the president with a knife” but was apprehended.

Latus Toure, the director of the Great Mosque, said an attacker had lunged for the president but wounded someone else.

AFP was not immediately able to confirm the accounts.

Mali has been struggling to contain an jihadist insurgency that first emerged in the north of the country in 2012, and has since spread to Burkina Faso, Mali and Niger.

Thousands of soldiers and civilians have been killed and hundreds of thousands have fled their homes.

The conflict has also been mirrored by political instability in the capital.

In May, he ousted a transitional government that had been  entrusted with the task of leading the country back to civilian rule in February 2022.

He was then named transitional president, but has pledged to keep to the goal for returning to civilian government.