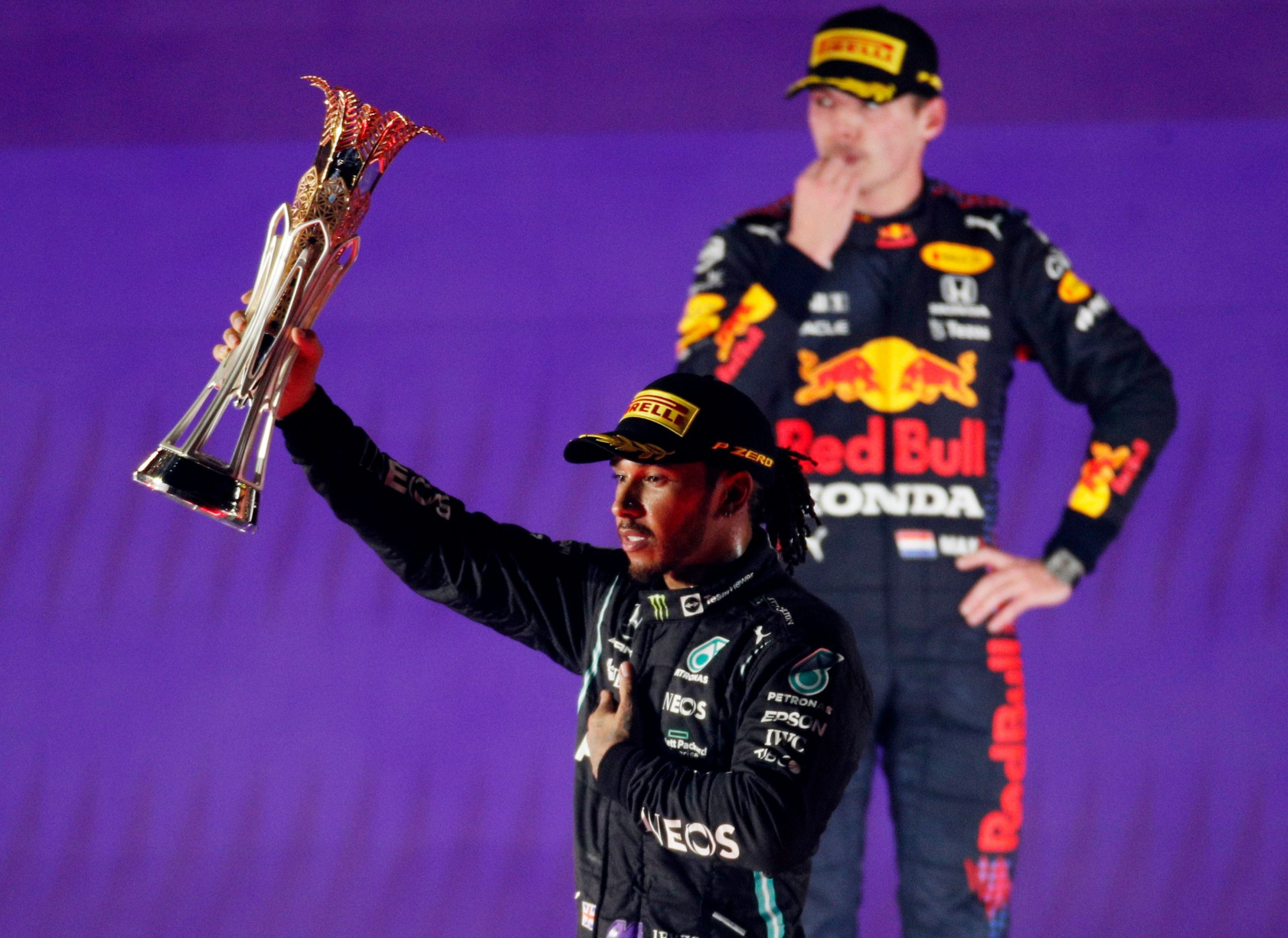 Lewis Hamilton kept his hopes of an eighth world championship title alive with a thrilling victory in a dramatic and at times chaotic Saudi Arabian Grand Prix on Sunday. The result left the seven-time champion level on 369.5 points with title rival Max Verstappen ahead of the final race in Abu Dhabi next weekend. Hamilton was behind Verstappen for much of the 50-lap race which was stopped twice because of crashes and interrupted numerous times by the safety car and virtual safety car.

But Hamilton, nursing a damaged front wing caused by a collision with Verstappen, came through late, to claim his eighth win of the season and the 103rd of his career.

The title will be settled in Abu Dhabi, although if neither finishes in the points it will be Verstappen, who has nine victories, who will take the title.

“I have been racing a long time but that was incredibly tough,” said Hamilton who gained an extra point for the fastest lap.

Verstappen finished second, 11.825secs behind in spite of being given a five-second penalty after colliding with the Mercedes star.

He was later sanctioned by 10 seconds by the stewards although that did not impact his finishing position.

“Just trying to race and this sport is more about penalties than racing,” said Verstappen.

“For me this is not Formula 1, but at least the fans enjoyed it and I gave it all today, but clearly not quick enough.”

Hamilton’s teammate Valtteri Bottas pipped Alpine’s Esteban Ocon on the line for third place to give Mercedes a 28-point lead in the constructors’ championship.

It was the first time that Jeddah had hosted a Grand Prix and the problems that the drivers, including Verstappen, had had in practice and qualifying were apparent again.

It was also the first Grand Prix since the death last month of Frank Williams and was played out against a backdrop of concerns about Saudi Arabia ‘sportswashing’ their human rights record.

For once Mercedes made the perfect start. Having locked out the front row, they succeeded in holding Verstappen at bay.

The safety car made its first appearance on lap 10 when Mick Schumacher spun on Turn 22 and slammed his Haas into the wall.

Hamilton pitted immediately to switch tyres with Bottas following a lap later while Verstappen stayed out to take the race lead.

Red Bull’s gamble looked to have paid off when the race was red-flagged shortly after in order for repairs to be done on the crash barriers.

That handed Verstappen a ‘free’ pitstop and allowed him to begin from the front when the race restarted, ahead of Hamilton and Bottas.

When the race resumed, Hamilton slipped past Verstappen who then barged his way around the outside, going off the track, to regain the advantage.

Behind them Sergio Perez was clipped by Charles Leclerc’s Ferrari, causing the Red Bull to spin off.

That in turn triggered a domino effect with George Russell (Williams) and Nikita Mazepin (Haas) also going off.

The stewards decided that Verstappen’s manouevre was illegal and promoted Alpine’s Ocon to pole for the third start of the race, with Hamilton in second and Verstappen in third.

It was the Dutchman who was quickest out of the blocks, blasting past the other two on the opening corner and setting the world championship title in his sights.

On lap 36 he attempted to overtake but in a move evocative of their tussle in Brazil, Verstappen cut across Hamilton to keep the lead.

Verstappen was ordered to give the place back but as he braked Hamilton ran into the back of him damaging his front wing.

When the Dutchman was again instructed to make way, he pulled over to let Hamilton pass and then immediately retook the lead.

A lap later Hamilton slipped past again to move back in front and this time, with Verstappen also hit by the five-second penalty, he was able to lead all the way to the chequered flag.