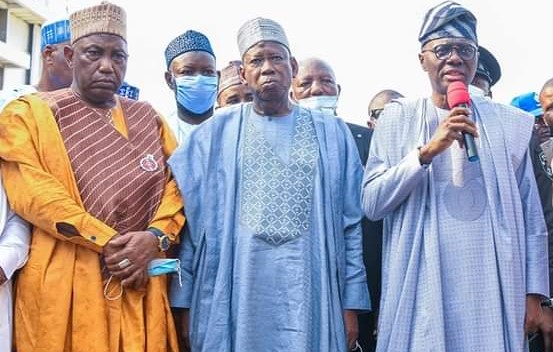 North-West governors on Wednesday paid a condolence visit to Governor Babajide Sanwo-Olu over the Gerrard Road, Ikoyi building collapse, which killed over forty persons few weeks ago. The governors also sympathised with the people of the state and families of those who died in the unfortunate incident.

The North-West Governors Forum represented by its chairman and Kastina State Governor, Rt. Hon. Aminu Bello Masari and his Kano State counterpart, Dr. Abdullahi Ganduje, commended Governor Sanwo-Olu for setting up a Tribunal of Inquiry into the collapsed building.

It would be recalled that a 21-storey building, still under construction, collapsed on Monday, November 1 at Gerrard Road, Ikoyi. Fifteen people survived while 45 people died in the unfortunate incident.

He said: “We are here representing governors of North West to physically come to condole with his Excellency, the Governor of Lagos State, families of the deceased and the entire Lagos community on the unfortunate incident that has happened.

“We pray to God that this kind of thing will not happen again. On behalf of the people of North West, accept our sincere condolences and sympathy.

“We cannot escape high rise buildings in Lagos but we must ensure that they do not cost lives and property of people.

“We are happy that the governor of Lagos State has instituted an inquiry tribunal that will unravel what happened here.”

He said: “We are here to condole with the people and the government of Lagos State and in particular, condole with families of those who lost their lives and sympathise with them on the very unfortunate situation.

“Lagos is a mega city. Comparing it to other megacities in the world and considering the circumstances of Lagos due to lack of adequate land for development, increase in population and high density, the issue of building high rise is absolutely necessary and cannot be avoided. But it is unfortunate that we have found ourselves in what happened.

“We are happy that the governor has taken immediate action to show concern about what happened. We are also happy that he appointed an independent technical panel that will examine and find out what actually happened in order to avoid future occurrences. We appreciate Governor Sanwo-Olu’s effort and condole with him and the people of Lagos state, particularly the families of those who lost their lives.”

Responding, Governor Sanwo-Olu appreciated the North-West governors for commiserating with the government and people of Lagos State over the Ikoyi collapsed building.

He said: “We have had various degrees of tribulations and very difficult moments for us as a state and there have been lessons learnt. We are all aware of the investigation into the collapsed building.

“It gladdens me to know that while Lagos is grieving, we are not alone. That is why I am excited and happy that some of my senior colleagues and brothers have come here to express solidarity and to also sympathise with the government and people of Lagos State.” 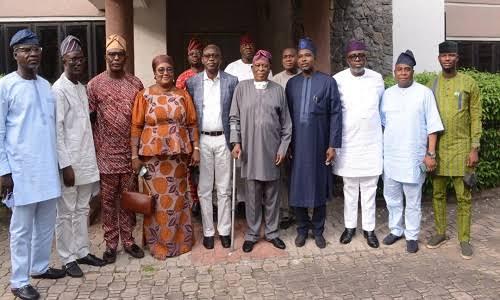 Former Governor Olusegun Osoba, on Wednesday, hosted members of the Ogun State Executive Council, with a charge to Governor Dapo Abiodun to focus more on projects and programmes that would be of great benefit to the people of the state.

Osoba gave this charge at his Ikoyi residence, Lagos, while receiving the exco members who paid a welcome visit to him on his arrival from the Unites Kingdom after a successful knee surgery.

The former governor expressed delight with the level of development, especially in the areas of road infrastructure, education, health and security, noting “Ogun is lucky to have a man who is focused and have the interest of the people at heart”.

“I want the governor to please continue to focus on projects that will benefit the people. I know he is doing very well on road construction and other sectors; more attention should also be given to security.

“The governor was the first to visit me after my arrival. He showed me what he is doing in the state like the Atan-Agbara road. He is determined to construct the Agbado road. He is also doing massive housing projects to take care of the middle class. Ogun is the fastest growing state in Nigeria because the governor is taking the advantage of our closeness to Lagos”, Osoba added.

He further lauded the administration on its land reform programme and noted that apart from discouraging land speculators, it would allow the state reap huge benefit from its land resource.

He urged Governor Abiodun to remain resolute in executing sustainable projects across the state.

While thanking the governor for all his support and words of encouragement, especially visiting him in the hospital before the surgery, Osoba, said, “don’t listen to rumours. Do all that you can. No government can do everything. My prayer is that you will leave Ogun state better than you met it.”

He appreciated the state executive members for supporting the governor in his quest to reposition the state, assuring that he would always support the governor through words of advice when and where necessary, submitting that “the success of the present administration is my success”.

Earlier, the leader of the delegation and Secretary to the State Government, Mr. Tokunbo Talabi, described the former governor as an elder statesman who has the interest of the state at heart

He appreciated God for a successful surgery, declaring that Ogun is happy to see him back on his feet.

“We are happy for your quick recovery. And you are recuperating very well. We have reasons to thank God. You are an elder statesman who has the interest of the state at heart, and you are very supportive of the incumbent administration”, the SSG noted.