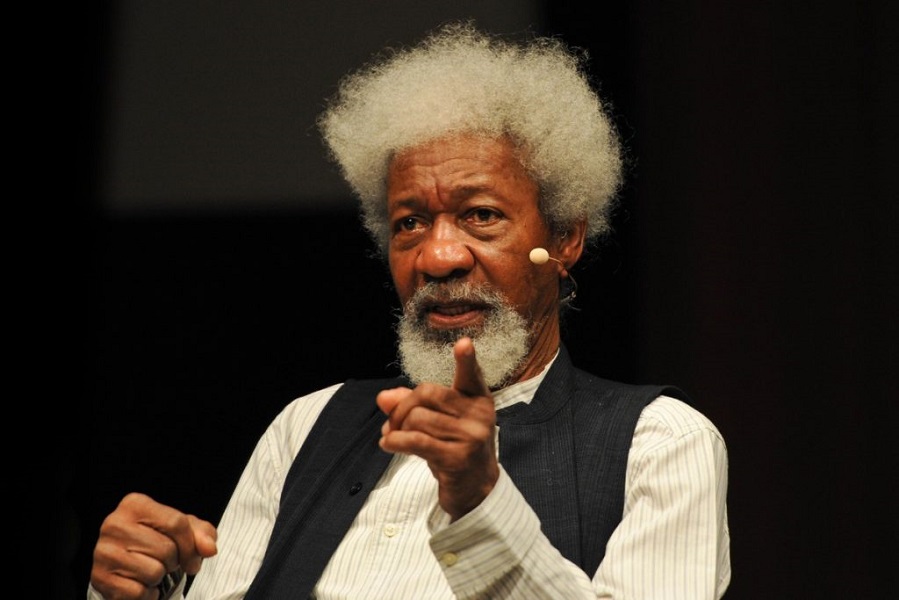 Nobel laureate, Prof Wole Soyinka, has condemned the Federal Government’s handling of the crises in the country.

Soyinka who met with journalists in Lagos on Friday during an interactive session titled, “Sanctions on the loose: Chasing the gnat with a sledgehammer,” referred to the ordeal of pro-Yoruba nation activist Sunday Igboho. He said Igboho committed no known crime against Nigeria.

Operatives of the Department of State Services on July 1, 2021, raided the Ibadan, Oyo State home of the activist, killed two and arrested 12 of his aides.
Igboho later fled to the Republic of Benin where he was arrested alongside his wife on July 19, 2021, by the International Criminal Police Organisation at the Cadjehoun Airport in Cotonou on their way to Germany.

His wife, Ropo, was released and Igboho is facing illegal migration charges in the Republic of Benin and seeking asylum to evade Federal Government’s request for his extradition to face allegations of stockpiling arms which he had denied.

Reacting to the development, Soyinka condemned the Federal Government’s role in Igboho’s travails.

Soyinka stated: “This is an appeal to the government of the Republic of Benin. Why are you keeping the victim in your prison? What crime did he commit against your state that you are holding him in prison, instead of letting him continue his journey? Igboho has not committed any crime against any known law in this nation. Thus, to ask for his repatriation is adding insult to injury. You invaded his house, destroyed his property, chased him into the wilderness and you are pursuing him. We ask the government of the Republic of Benin to release the man to continue his business which was interrupted unjustly. Please, rectify this error and don’t compound any further by holding Sunday Igboho in prison one day long.”

Also, the playwright decried the incessant abductions of pupils by bandits in the North, urging the United Nations to wade into the matter to protect the pupils.

He added : “We are calling on the United Nations to intervene and stop this slave trade; to live up to its noble intentions, declarations and rescue these children and put a stop to this act. If Nigeria continues to stand on her sovereignty, I leave this to the experts, I am talking as a layman, I think the protocols of the UN enable the organisation to declare sections of this country under the UN. If the government has failed to protect its own people and failed to fulfil its responsibility under protocols it’s a signatory to, the UN has a right and responsibility to declare those zones UN protectorates. We don’t want what we are undergoing now to become the new normal peculiar to the Nigerian nation.’’

READ ALSO: How We Will Deal With Pro-grazing Reserves Governors – Southern Agitators

On Buhari’s recent order for the review of 368 grazing routes in 25 states across the country, Soyinka stated, “He doesn’t seem to hear things. Virtually the whole nation is screaming, ‘We don’t want any open cattle grazing; whether they go by the name; cattle routes or grazing reserves.’ Around the nation, we have opinions surmounting the antiquated modes of cattle rearing. Even the all-powerful, untouchable Miyetti Allah, patron of the Fulani herdsmen, has gone on record to say ranching is what they want. When all that has been settled in rational terms and then we hear a new version of RUGA. Why is this president obsessed about something being rejected right, left and centre? The obsession is on such a level that even people who consider themselves rational like myself begin to wonder if this is really about cattle or an agenda that we don’t know about? Like the Yoruba will say, ‘Eleyi koja oju lasan (Roughly translated to mean an act that defies logic).'”

The writer also faulted the infraction letter sent to Channels Television by the National Broadcasting Commission for some comments purportedly made against Buhari by two guests who featured on a programme on the station.

He described the letter titled, “Notice of Infraction,’’ as one of the most outstanding semi-illiterate kinds of official queries.

“Decree 4 has no place in a democracy. It’s about time we emphasised and demonstrated that in both language and in act,” he stated.

How We Will Deal With Pro-grazing Reserves Governors – Southern Agitators