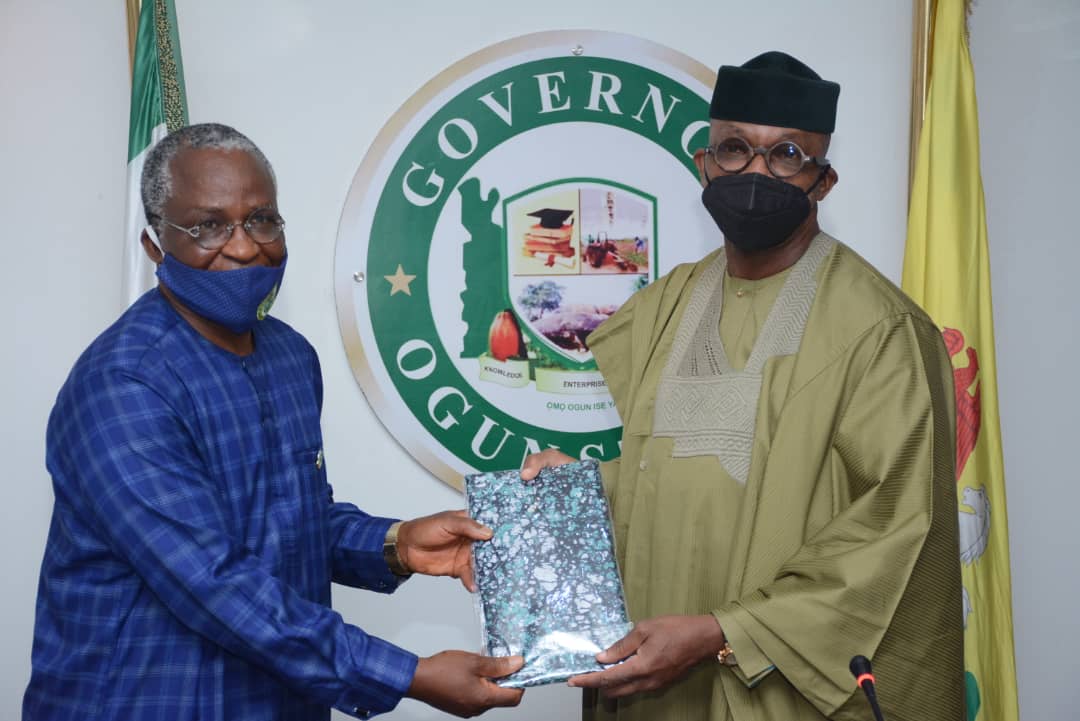 L-R: President, Nigerian Institute of Town Planning, TPL Toyin Ayinde exchanging gifts with Ogun State governor, Prince Dapo Abiodun during the visit of the NITP leaders to the Governor's office at Oke Mosan, Abeokuta, ahead of the Institute's convention on Monday

Ogun State Governor Dapo Abiodun has called for a collaboration between the Nigerian Institute of Town Planners (NITP) and the state, in the area of proper town planning and urban development with a view to espousing good governance and socioeconomic development.

Abiodun made the call when he played host to the National President of the NITP and other members of the association who were in the state for the 52nd National Conference and Annual General meeting of the institute.

The governor, who identified proper town planning and urban development as catalyst for physical and environmental development of any society, hinted that his administration was working on modalities to correct what he described as “chaotic and haphazard” building of structures at Mowe and Ibafo towns.

He said the Lagos-Ogun Development Joint Commission was conceptualized and created with the aim of ensuring synergy between the two states in areas of planning, security, economic development among others.

He, however, said plans were in top gear to have an Education and Medical Cities along the newly constructed Ijebu-Ode-Epe expressway corridor, noting that the cities would be resilient, modern and clean.

The governor said his administration decided to embark on the construction of the Ijebu-Ode-Epe expressway to look and develop an alternative route to evacuate people from Lagos to Ogun and other parts of Nigeria.

“If indeed we want to begin to re-correct the anomalies and what has happened in the past, we have to take the bull by the horn. So, we decided we are going to start with Epe-Ijebu-Ode Road because it is an evacuation road for people that would hitherto come from Lagos-Ibadan Road and then turn to the Sagamu-Benin expressway. That road now bypasses Lagos-Ibadan and you can go through Lekki and go to Benin,” he noted.

Abiodun also noted that his administration had commenced plans to give the city of Abeokuta a new look so it can occupy its pride of place in the comity of capital cities in the world.

Earlier in his remarks, the National President of the NITP, Toyin Ayinde, said it had become imperative to make Nigerians understand the importance of town planning, adding that the institute has been able to find out that planning answers to good governance.

While commending the Abiodun-led administration for making huge advancement in the area of urban development, he urged the governor to look at the 2005 Urban and Physical Planning Law with a view to ensuring its review.

According to him, the law ought to be reviewed on a five-year basis to measure the performance of the plan in the state, submitting “when the law is fully operational, it will help governor of a state to see all of the settlements in the state and how they are positioned.”